Economic Justice is on the Ballot this Recall Election 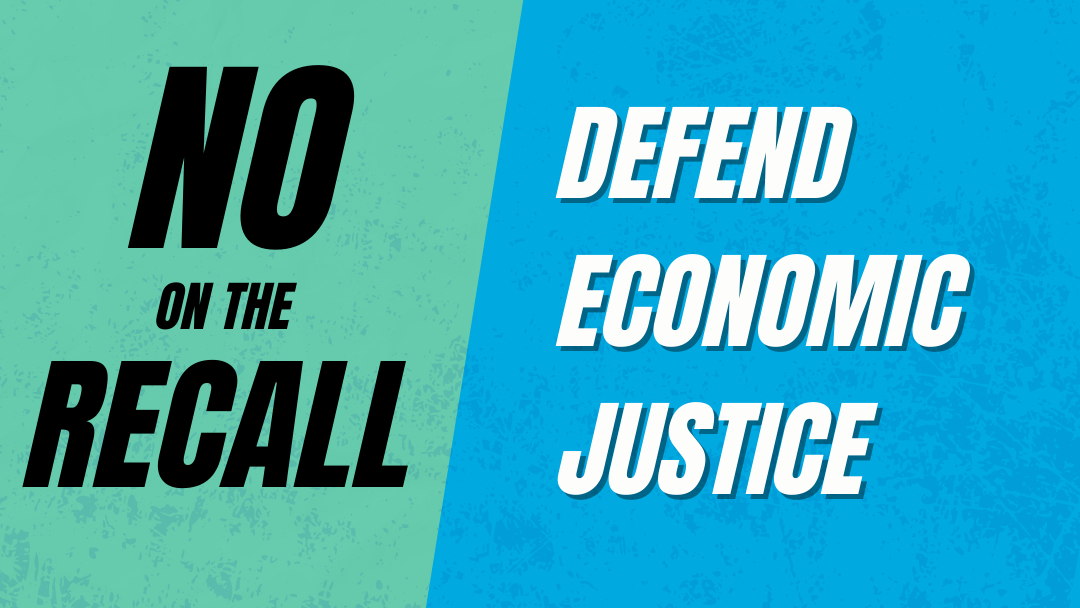 Homelessness in California has become a part of our daily lives as encampments crowd major cities, small towns, and rural areas. Los Angeles, the city that houses movie stars and millionaires, has an entire neighborhood where you can see first hand the result of poverty, displacement, and lack of government action to address mental health issues. It is a problem that can no longer be ignored and politicians are using this issue to push their agendas in hopes of becoming California’s new governor.

Homelessness is the epitome of economic injustice. It affects people of color, specifically Black Americans at disproportionate rates. Despite only making up 33% of California’s total population, Black people makeup over 50% of the homeless population in the state. Poverty is criminalized over and over again and the destruction of property in the namesake of closing encampments is enforced by police and government officials across cities.

This issue has become a daily conversation starter, joining the weather and recents sports events as contents of small talk, but mass homelessness should be a driving force for voters deciding on who will lead this state.

Governor Newsom is focused on building new housing units through project Homekey, which began in 2020. Homekey allocated $850 million to fund 94 housing projects in 2020 and the following year received an additional $5.8 billion to create 42,000 new housing units with options for individuals with mental health challenges.

Some top republican candidates have suggested the state collaborate with churches and provide a spiritual awakening for people experiencing homelessness. Another candidate is hoping to implement a “compassionate but effective enforcement” against houseless individuals to get them off the streets. However, building shelters and homes is not the priority but rather “[helping] them find a way back home” which comes at a lower cost than building an apartment. John Brady, a board member of San Diego Regional Task Force on Homelessness has argued that this policy has caused further harm and trauma to the unsheltered community and creates a continuous moving population of homeless individuals escaping the terrorizing forces.

While statistics vary across sources, mental health and drug abuse is a prominent issue in homeless individuals, however their socio-economic status is not the result of just their individual choices. Lack of access to healthcare, minimum wages that are not enough to live modestly, and the disappearing hopes of owning a home are the tip of the icebergs that make up California’s homeless crisis. Homelessness is what happens when the systems and institutions ignore and criminalize the ones who need help the most. Homelessness in California and across the nation has been bubbling since the pandemic and the eviction moratorium has withheld the explosion for months. We must choose the right leader to combat the issue and support the influx of families and individuals that are on the verge of joining the thousands displaced and calling the streets and alleys home.

During the peak of the pandemic, I was working in a property management office and saw first hand which residents were turning in COVID declarations and rent-relief applications. Tenants have been demonized by the republican party as individuals looking for government handouts but the residents coming into the office were lower-income Black and Brown families who had their hours cut and forced to decide if this month they would pay rent or feed their children. The possibility of a Republican governor would put these families in danger of being displaced for the sake of preserving the possibility that one person out of the thousands in need may misuse the relief dollars.

The lack of initiative to build affordable housing by the right will not just affect lower income families, but students as well. As colleges and universities return to in-person instruction, students are rushing back to these cities with limited options for affordable housing. Nevermind that, one of the top candidates previously noted that they do not believe in a minimum wage, the increased cost to rent a single room alone can force students to sacrifice several units to have just enough time to complete their full employment hours and live modestly.

The recall is more than just a judgement day for Governor Newsom. The recall will harm the disenfranchised, the marginalized, and lower-income who are playing catch-up after a year of devastation. The lack of solutions and initiatives from the right to bring upon some much needed economic justice will place California in a deeper hole of despair.

I am calling on you to vote NO on the recall tomorrow. Develop a plan to vote in person or postmark your ballot by tomorrow. There is too much at stake to sit this election out.