No On Prop 25: Treating a Venomous Bite with Poison

Jose Armendariz explains how Proposition 25 replaces cash bail with a worse system based on risk assessment.

What is the point of replacing a racially biased and classist system with another that will continue to feed mass incarceration and pretrial racism? That is essentially what Proposition 25 would do. Prop 25 carries the optics of victory, but a more harmful future for people most impacted.

The proposition aims to bring an end to the unjust and unfair money bail system in California. At face value it sounds like a great thing. For decades, the money bail system has criminalized poverty and favored the rich, who when charged with a crime can afford to bail out before ever hearing the sound of a jail cell door close behind them. All while profiting off of low-income Black people and people of color. Individuals who can afford to pay bail are able to fight their case from the outside. This significantly increases their chance of having their charges dismissed or receiving a favorable outcome in their case. Those who remain in jail solely because they are unable to pay face a greater disadvantage and a higher chance of conviction even for crimes they are innocent of.

While most people recognize the inherent racial and economic bias of the money bail system and agree that we must get rid of it, some are okay with replacing it with a system that is just as bad, if not worse. Prop 25 is a vial of poison; it is not the antidote that would treat the venomous bite of a racially biased and unfair system. Contrary to what supporters, politicians, the probation union, and special interests want you to think, Prop 25 means more people of color in jail, more innocent people in jail and more funding for law enforcement.

To some, Prop 25 looks great on paper. But a closer look reveals an ugly truth. Under Prop 25, the money bail system would be replaced by a new system of pretrial risk assessments. An algorithm would determine whether a person poses any risk to the community. Based on this information, a judge would decide who can fight their case from the outside and who has to fight it from inside a cage.

While the algorithm itself is not the problem, the data it would use to calculate risk, including arrest history, housing stability, and employment, is inextricably tied to systemic racism. There are no clear parameters for what other factors or metrics could be used to assign people to risk categories. As evidenced in places where risk assessments have been implemented, people of color would continue to be disproportionately deemed “high risk” and incarcerated before their trial.

With the coronavirus still at large and more than 215,000 Americans dead as a result of it, communities of color continue to experience a disproportionate risk of infection and death. Disparate impacts, an all-time high unemployment rate and increasing housing instability and homelessness, have communities of color struggling to survive. It is clear that the people who would be most affected by Prop 25’s biased risk assessment would be those most marginalized and underserved. The very people the authors and supporters of Prop 25 claim they intend to help.

Prop 25 also means more funding for law enforcement, we are talking hundreds of millions of taxpayer dollars, to increase the size and scope of probation departments–the same departments backing the proposition. Under the guise of “pretrial services,” probation officers would largely be in charge of supervising people who are awaiting trial in the community. Supervision of legally innocent people, a population that probation has no experience with, would dramatically increase. The proposition would result in probation officers becoming de facto bounty hunters on taxpayer money. These are the same officers who have a reputation of harassing people and locking them up for some of the most trivial infractions such as showing up late to a probation meeting or missing a visit at their office. Visits that they can randomly impose on individuals on any given day or time. They can also barge into a person’s place of employment or home without any notice, many times for no reason other than to show force and control. Simply put, probation officers are not fit to handle “pretrial services” and we should not invest in their continued control of communities of color.

To make matters worse, Prop 25 would essentially turn judges into autocrats, giving them unchecked power. For instance, even when an algorithm determines that a person would not pose a risk to their community, a judge can simply overrule the algorithm’s computation and deny a person’s release from custody without ever having to explain why. On the flip side, when a person is deemed “high-risk,” there is no asking the judge to consider other factors or opportunities to appeal a decision. With no checks and balances to hold judges accountable or the ability to rein in their power, we should expect the continued use of pretrial jail time to pressure people into pleading guilty.

Many people will make guilty pleas, even to charges they are innocent of, and suffer the long-term consequences of living with a criminal record simply to avoid the many horrors behind bars. Jails are filled with people who are innocent, those who have been racially profiled and those who have been overpoliced and overcriminalized for not having a place to sleep or  needing mental health and substance use care. Do not doubt for a second that Prop 25 will allow judges to keep communities of color in cages. Do not doubt that they will refuse to relinquish this power once it is in their hands. Right now, it is in yours.

We must not allow judges and probation to co-opt or detract from the fight to end pretrial detention. While Prop 25 would end money bail, it does absolutely nothing to address pretrial racism and pretrial incarceration. Instead, it creates a new and bigger fight for people of color, poor people, and the movement for freedom and liberation. For all of these reasons, join impacted people and movement leaders and organizers, in voting no on a “solution” that will only make things worse. Vote NO on Prop 25. 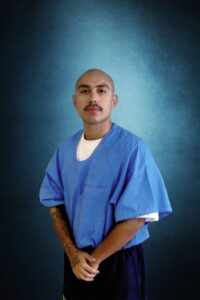 is an incarcerated student, writer, and organizer. His story and work has been covered in Cal Matters and La Opinion, and published in Voice of OC.