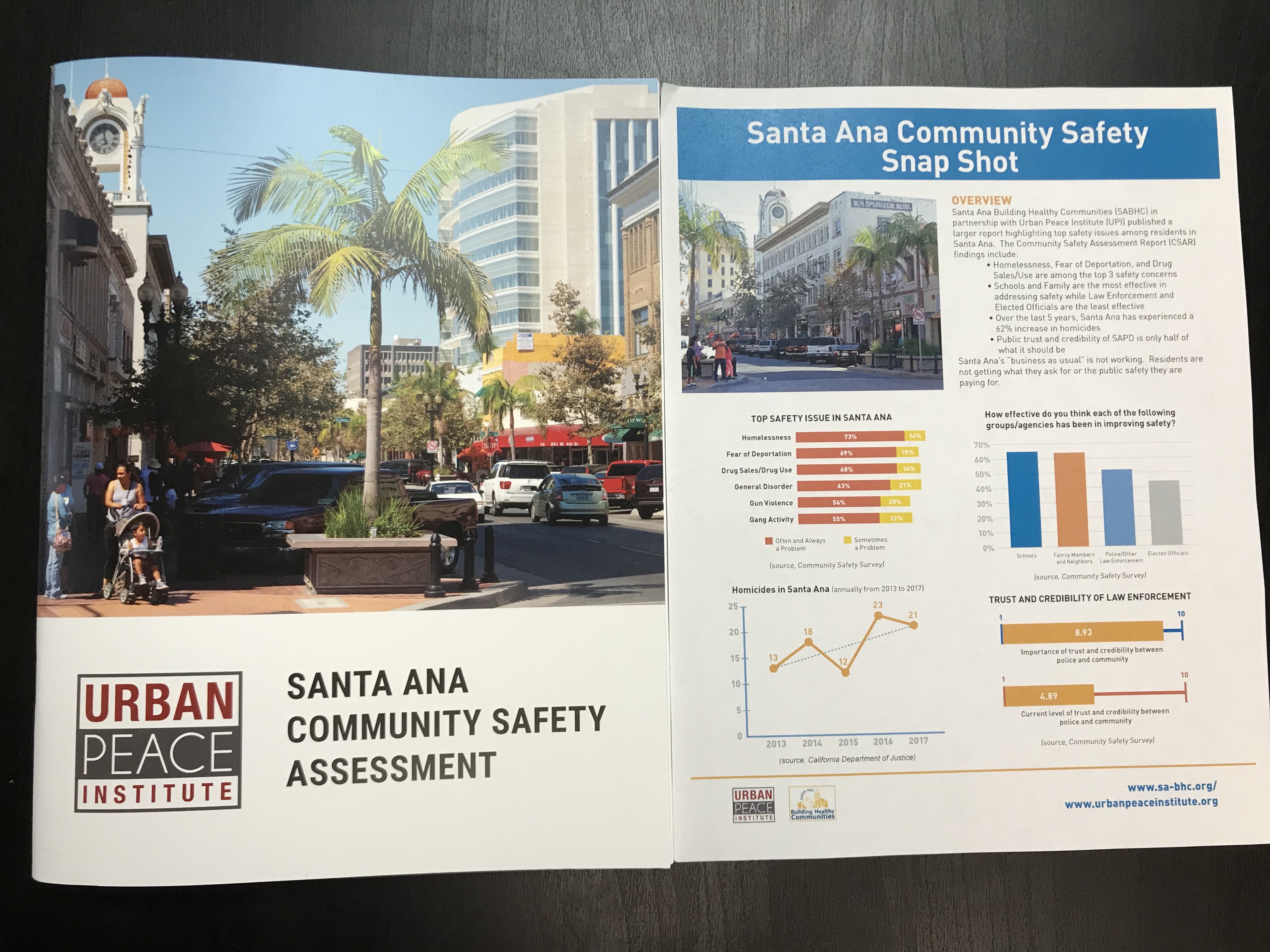 A newly released report by the Urban Peace Institute (UPI) reveals that violent crime and homicide rates are up in SanTana despite the city’s police-first spending strategy. Based on the engagement with over 1,000 residents, the Community Safety Assessment Report highlights top safety issues in the city. UPI is a non-profit organization working with communities across the country to develop and implement innovative policy, system and practice solutions to reduce violence, achieve safety, and improve overall community health.

Despite these figures, crime may still be higher than calculated as a result of underreporting. This is due, in part, to the community’s lack of trust in the Santa Ana Police Department.

At 36 percent, over one-third of respondents “rarely” or “never seek services” from law enforcement.

“Police legitimacy was a major concern shared by many participants given their experiences in the community. They did not have a high degree of confidence that law enforcement would respond adequately to address their needs or concerns, possibly jeopardizing their safety,” the report states.

Close to half of the respondents indicated that police have been “totally ineffective” or “somewhat ineffective” in improving community safety, demonstrating that while policing remains the city’s main vehicle to address community safety, a significant number of residents view traditional policing practices as the least effective.

Respondents also noted their uncomfortable interactions with police officers as well as highlighting police harassment of youth as a significant issue.

‘There was a specific concern from adult residents that law enforcement treated youth differently. They indicated that youth would be handcuffed and usually seen with four or more officers. Roughly one third of youth indicated that police harassment was “always” or “often a problem” while 17 percent indicated it as “sometimes a problem,”’ the report states.

Despite the lack of confidence in the police department and the upward trend in violent crime, even as police spending has been prioritized by councilmembers backed by the Santa Ana Police Officers Association (SAPOA), the council remains committed to moving forward with business as usual.

After running on a public safety platform, this year the SAPOA-backed council majority approved a $25 million wage increase for police officers and allocated 42% of the city budget to the Police Department for Fiscal Year 2019.

But if showering the department and its police officers with money is supposed to improve safety, the desired outcome has failed to materialize.

Instead, UPI offers a series of policy recommendations SanTana can adopt to address safety concerns in the safest and most effective way. These include broadening the definition of what constitutes public safety in an effort to prevent and treat violence, not just to respond to it; coordinating with community based providers, social workers, and mental health workers, to respond to situations involving mental health, homelessness, and gang involvement; as well as investing in community based resources such as schools, community organizations, and family.

“The recommendations are all cost-saving ventures. The recommendations focus on building off the existing non-city infrastructure of services and suggest for better coordination and communication, incorporating resident perspectives into local policy, and being open to ideas right outside city hall doors. There’s lots of great services and ideas in the city (from community-based or faith-based to the school district or businesses), but the city doesn’t seem to be interested in anything other than maintaining the status quo,” says Erick Lam, Manager of Strategic Initiative at UPI.

Still, with these recommendations in hand, SanTana residents are hard pressed to find elected officials and other city leaders with the political courage and will to try a different approach. According to the report, 58% of respondents indicated that elected officials have been totally or somewhat ineffective in improving safety, the lowest-rated categories when asked how effective groups have been in improving safety in the community.

“The biggest gap we found during this assessment process was the city’s inability to authentically listen to, incorporate and partner with their constituents, the people whose voices and concerns are outlined in the report. There is brewing frustration from residents around the city and elected officials in how the city addresses, or in this case, does not address community safety. We hope this report continues the dialogue for Santa Ana’s future,”  Lam adds

That need for an ongoing conversation on what improving community safety in an effective, holistic way cannot be overstated. Whether city leaders want it or not, this discussion should be unavoidable in a year when SanTana voters are being asked to choose a new council member for Ward 4, and when the SAPOA is widely believed to have been behind a failed recall effort against Juan Villegas and Cecilia Iglesias, the only two sitting council members that voted against the SAPOA’s $25 Million contract. These recall efforts were, after all, based on the argument that both council members are a detriment to public safety.