Put money into building Santa Ana communities, not policing them! 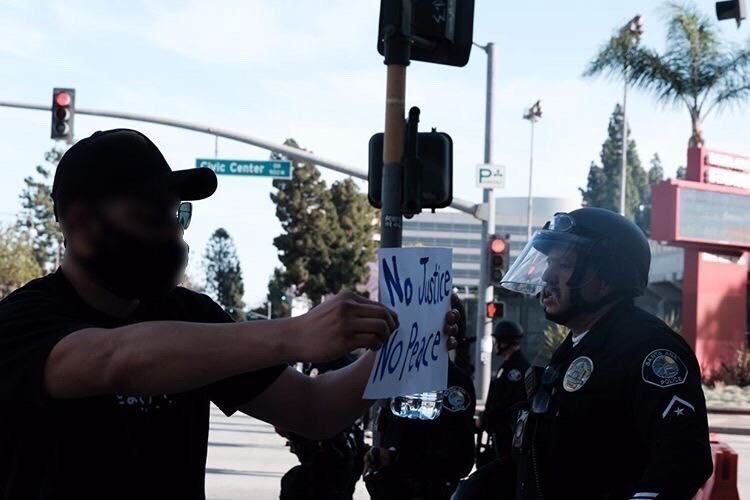 In the wake of the murders of George Floyd, Ahmaud Arbery, Breonna Taylor, Sean Reed, Tony Mcdade, and the countless other Black Lives murdered at the hands of police officers and white supremacists across the country, cities across the world have arisen in solidarity, including Santa Ana. Santa Ana community members, including some city elected officials, proclaimed that Black Lives Matter and called for an end to police violence.

While these murders occurred miles away, the same systemic and structural inequalities that caused these deaths are alive in Santa Ana. That is the reason why Santa Ana’s residents, especially the youth, felt such outrage and took to the streets, even in the midst of a global pandemic. For many young people in the city, police harassment and violence are not abstract concepts that happen only in faraway cities. Rather, they are part of their–our–daily lives.

Especially now, we can’t ignore the fact that the Santa Ana Police Department (SAPD) remains one of the deadliest police departments in California. In fact, SAPD is responsible for the highest numbers of fatal shootings in Orange County, with 27 shootings per 324,568 residents.

True equality, and, specifically, fully valuing Black Life would require change at every level: not only our criminal justice system, but also our economic policies, foreign policies, media environment, and so much more. However, and in keeping with the demands put forward by the Movement for Black Lives, we want to outline a series of changes and steps that Santa Ana must adopt immediately to protect its people.

Our first priority is to transform the city’s spending. Due to the impacts of COVID-19 on the city’s tax revenues, we understand that deep cuts are expected in next year’s budget. Yet the city will still increase public safety spending — the majority of which is police spending — by $13.5 million. This cannot stand.

If COVID-19-related cuts are to be made, they must come first and foremost from the SAPD budget. City Council has increased SAPD’s budget year after year, most egregiously in the form of the $25 Million Police Officers Association Contract of 2018. Residents should not make sacrifices while an abusive police force continues to receive unjust and exorbitant rewards. Instead, the City should make cuts to protect other critical city programs like libraries, parks, and housing, which positively impact on the community and contribute to a healthier city. These services do far more for public safety than SAPD ever has.

We demand the following actions from the Council in order to challenge systemic racism, champion police accountability, and end police violence for our residents:

1. Cut SAPD’s budget and use the savings to preserve and prop up city programs like libraries, parks, housing, etc. which have positive impacts on the community and contribute to a healthier city. Due to impacts of COVID-19 on the city’s tax revenues, we understand deep cuts are expected in next year’s budget. Yet public safety spending is increasing by $13.5 million. When the city tends to equate public safety with police spending, this is unjust and inequitable.

2. Grant genuine community oversight of the police department through the creation of a civilian review board with the following powers: subpoena power; investigatory authority; disciplinary authority; and the ability to hire and fire officers, including the Chief of Police.

3. Renegotiate POA contracts with respect to the handling of police misconduct, and include community stakeholders in the bargaining process, including in all future POA contracts.

4. The immediate release of all police misconduct records and body camera footages on a publicly available website at no cost.

5. A Resolution from the Santa Ana Council in support of Repealing California’s Public Safety Officers Procedural Bill of Rights Act.

6. Demilitarization of the police and an end to all federal funding to purchase military equipment and weapons for our police department.

7. Address racial profiling by incorporating an individual stop and search database compliant with the California Racial and Identity Act passed by California in 2016.