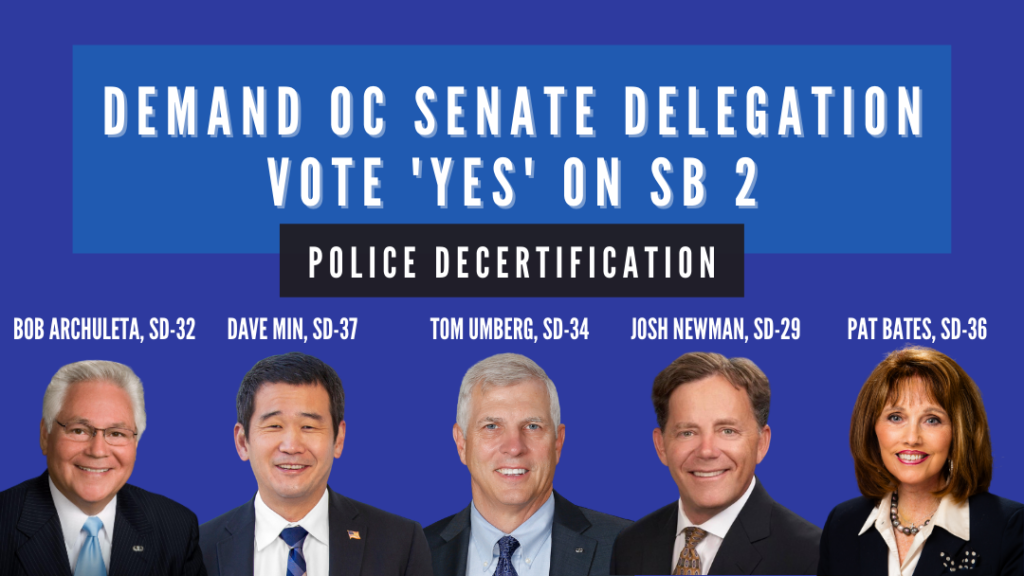 California is one of four states in the country who do not have the authority to decertify an officer for serious crimes and incidents of dishonesty, theft, sexual assault, and excessive use of force.

SB 2, The Kenneth Ross Jr. Police Decertification Act of 2021, increases accountability for law enforcement officers that commit serious misconduct and violate a person’s civil rights by creating a process to take abusive officers off the streets and protect historically marginalized communities targeted by police violence. It is long overdue for California to join the majority in the nation in having the ability to remove people that should no longer be law enforcement.

SB 2 would have impacted Orange County cases such as the 2019 death of Daniel Ramirez III. Daniel Ramirez III was murdered by Anaheim Police Officer Nick Bennallack. Officer Bennallack has been cleared of four on duty deadly police shootings since 2012, including the death of Manuel Diaz. Individuals like Bennallack continue to be in law enforcement and face no accountability.

Orange County’s State Senators have a responsibility to hold law enforcement officers accountable for the harm and terror inflicted on communities of color. Join us in calling on Senator Tom Umberg to support SB 2 when it comes before the Judiciary Committee on April 27th, and on every Orange County State Senator when the bill reaches the Senate floor.