Menu
Join
Donate
To: Orange County Board of Supervisors 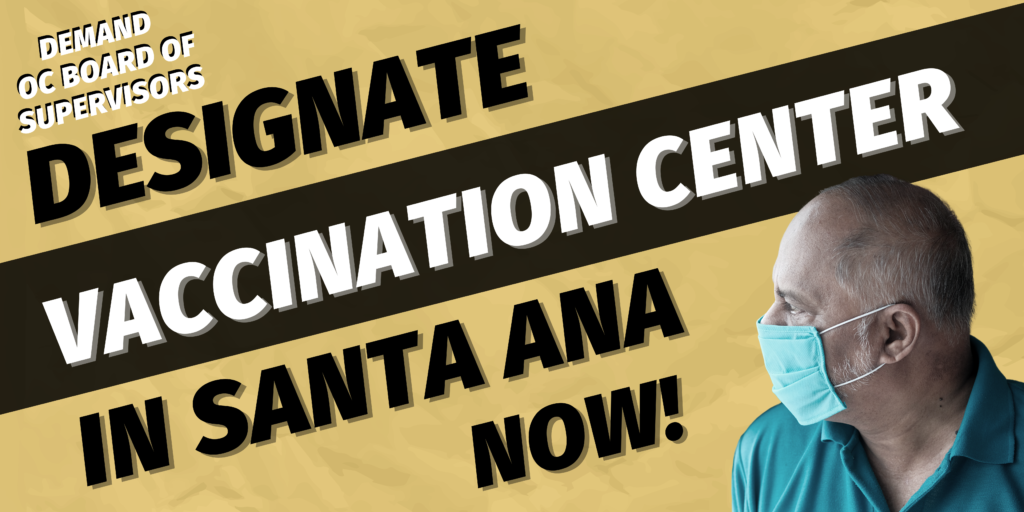 The Orange County Board of Supervisors’ (BOS) response to the Covid-19 pandemic has disproportionately hurt Latinxs in Orange County. The county’s lack of transparency around decisions to ignore and fight against state mandates intended to mitigate the spread of Covid is a political decision that has put lives at risk. As a result, cities like Santa Ana and Anaheim where the largest share of Latinxs in the county reside, have felt the brunt of the pandemic’s impacts.

This pattern of willful neglect continues in the rollout of vaccination efforts, with the BOS dragging their feet to set up a vaccine center in Santa Ana and staying quiet as CVS Pharmacy prioritizes majority white, affluent cities at the expense of those hit hardest by the pandemic.

Latinxs, who make up roughly 35% of Orange County residents, account for 44% of all virus cases and 38% of the nearly 3,000 deaths caused by the virus. Despite the disproportionate impact on Latinxs, only 11% of roughly 178,000 vaccinations have gone to Latinx communities, according to a vaccine tracker from the county Health Care Agency.

This is why we’re calling on the BOS to immediately place a focus on vaccination efforts in Santa Ana similar to the two “super sites” the Board of Supervisors has already designated in Aliso Viejo and Anaheim.

While we applaud the selection of Anaheim, another hard hit city with a significant Latinx population, it is extremely infuriating that the county has failed to designate a center in Santa Ana, especially when the city stands ready to support such a site with financial and staffing resources, as communicated by Mayor Vicente Sarmiento to BOS Chairman Andrew Do in a February 4 letter.

“The City of Santa Ana stands ready to partner with the County of Orange to assist with an equitable and efficient distribution of COVID-19 vaccines in our community…The City Council has set aside funding, as well as secured potential sites and staffing to assist with vaccine delivery,” Mayor Sarmiento wrote.

Demand the Orange County Board of Supervisors immediately designate a vaccination center in Santa Ana that is accessible to the entire community.